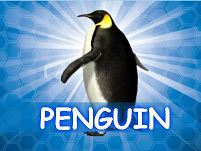 Google wishes to remain the number one–go-to–internet search provider and therefore has been developing new algorithms in an attempt to get the pages it thinks are the best to page one in its ranking. Because of this, Google has begun instantiating implementations of these algorithms in an attempt to ‘field test’ the effects of the results. The results have been mixed and have left many in a state of panic over what to do about their positions being lowered in Google’s page ranking.

Google’s “Penguin” has been purportedly targeting–actively–the people it sees as being cheaters of its services and giving them diminishing rankings on its site. What constitutes as ‘cheating’, however, is debated and many well-intentioned webmasters who have ended up on the wrong side of Google’s attempts to make things fair.

This, obviously, is an ethical issue and has raised many concerns for people trying to earn an honest living online. These individuals, who oftentimes have received poor rankings on Google, have been proactive in partaking of SEO measures which, historically, have helped websites increase their ranking on Google. Some of these measures, however–especially when done zealously or over ambitiously–have been seen by Google and are being treated as though they are unethical attempts to ‘game’ Google’s services. Subsequently, Google has been penalizing sites which have been over-active in these sorts of strategies and have created an environment of ‘Penguin Whacking’–or rather, Google’s Penguin algorithm penalizing people’s sites.

There is a climate of uncertainty as Google does not elaborate in any great detail the inner workings of either it’s algorithms or its goals and intentions of what its trying to accomplish. The uncertainty will most likely persist as Google’s algorithms remain–and most likely will remain–proprietary, and Google does not wish to make known much of its inner intentions.

The effects of the results of these algorithms has been considered anywhere between neutral to an outright disaster by the people its effecting. As much as of 3.1% of the internet at large has been effected on Google and many sites have been ‘whacked’ out of their previous rankings to something lower–leaving webmasters in a scramble on what to do to recover some of their positions.

While most of the effects on websites has been negative, there are further complaints that certain websites, which many maintain are ‘low-quality’, are making it not only to page one on Google, but sometimes are the very first link offered by their search service. So while some people are negatively affected by Google Penguin, others–while perhaps unwarrantedly in some cases–are making it all the way to page one.

Google maintains that it’s algorithms are being implemented to improve results, however, there are many complaints, and many webmasters in states of crisis, over what to do about their diminishing ranking on Google. These diminishing rankings on Google can often time spell disaster for companies, sometimes leading those companies which rely on their ranking on Google for business to face the threat of bankruptcy. As a result, many people have been grouping together in efforts to collaboratively figure out what’s going on to perhaps find solutions to their plight.

These solutions, while not guaranteed, seem to revolve around not keyword stuffing–or rather, avoiding using the same keyword an overzealous amount of times–avoiding the act of spinning articles, and sticking to original content. While original content isn’t cheap, the new need for original content may open up new markets for new content generating services.

What does it look for?

While it is unlikely that Google will outright state everything that its new algorithms are looking for, there are many reports of the effects of the algorithms and many have determined what could have possibly been the cause for them being targeted by Google for penalization.

So what should I avoid doing?

● Cloaking: Hosting different versions of your website, giving them to search engines and users in an attempt to improve rankings.

Penguin’s effect on content: So what should I do?

Content on your site plays a major role in how Google Penguin will affect your page ranking. Spun articles are out, original content is in. Diversifying your content may also help.

So what is known of Penguin–what does it look for specifically?

Google’s algorithm, codenamed Penguin–whose inner-workings are considered proprietary–has been reported to explicitly look for some of the following:

Some of the things to do when backlinking to your site

Recovering from a Penguin whack

The main issues that seem to be the problem when/if your site is tanked by Google Penguin are these:

By remedying these things you may hope to see a recovery in your standing with Google Penguin.

Some other things you should consider doing is:

It’s a little more controversial, but another strategy you could try, is partially de-optimizing your site. Google Penguin has purportedly been penalizing sites that are “over-optimized”. While this is really just a rumor there actually have been reports where de-optimization has worked. Whether it was actually the act of de-optimization itself or simply the effects of changing something on the underlying site that penguin didn’t like, we don’t know. If all else fails you could try it–just remember to save a backup of your site if it turns out not to help you any.

Let Backlinks On Steroids analyze your website and recommend the best course of action to bring your site back to page one.

A few words on the “Patent” algorithm

You may notice that your page may bounce up and in ranking for a few days at a time. The Patent Algorithm was developed to analyze how the Google algorithms are ‘making the decisions’ to place sites on page one. It looks for patterns by lowering the position of various websites to see what kind of reaction the webmaster will take in order to get it back up. It is best if no action is taken. The pattern seems to be 5 days down, 3 to 4 days on top again. 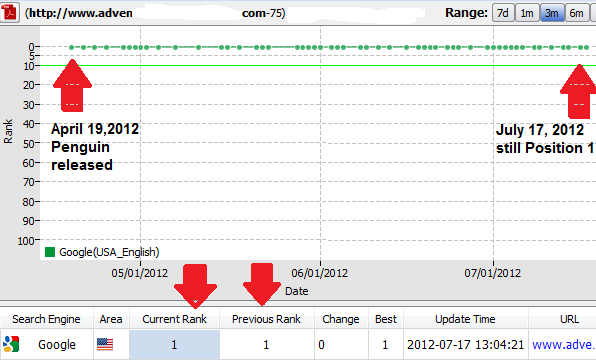 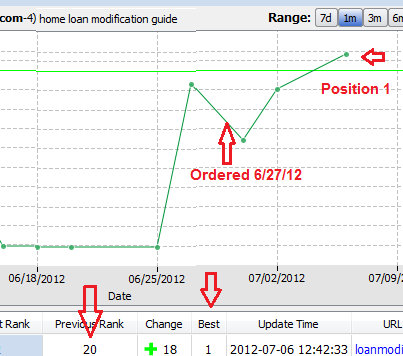